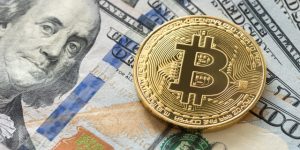 Bitcoin bounced back strongly today after a record price crash of more than $10,000 on Monday. The top cryptocurrency is currently trading above $38,000 and looking to reclaim its position above $41,000.

At the start of 2020 bitcoin was struggling to keep its position above $10k and had a strong co-relation with S&P 500 leading many to doubt its non-corelative asset claim. However, post halving its price trend has reached levels never seen before shedding any correlation with the traditional stock market or asset.

According to data from @coinmetrics, the correlation between bitcoin and the USD is now -0.15, it’s lowest reading in history.

The inverse correlation is still tiny but the trend is clear.

That’s what happens when #bitcoin flies for 6 months while the dollar sinks like a stone pic.twitter.com/rbPmMNfAWF

In its run to the new all-time-high above $42,000 fueled by halving in May and institutional FOMO, Bitcoin’s correlation with the US Dollar has reached a new low of -0.15 as per the data from Coinmetrics. The declining correlation between bitcoin, a growing hedging asset, and the US Dollar which is the world’s reserve currency is being attributed to a pandemic led money printing spree by the Federal Reserve and Bitcoin’s mammoth rise of nearly $30,000 in the same time frame.

The Covid-19 pandemic that broke out at the start of 2020 and peaked during March brought the whole world to a standstill shutting all businesses that crippled the economy. This led many governments around the globe to announce stimulus packages to help citizens cope with the pandemic. As a result, federal reserves had to print trillions of dollars extra to keep things moving.

A total of nearly $9 trillion USD was printed in 2020 alone which is equivalent to one-fifth of the total supply reserve of the US Dollar.

This printing spree by Feds has deteriorated the value of the US dollar significantly overtime whereas Bitcoin has managed to gain the status of a true inflation hedge in the same time frame. This has also led many fear that if the printing spree continues in the current market with signs of another recession quite strong, US Dollar might lose its status as a reserve currency possibly to Bitcoin.

The post Bitcoin Correlation With US Dollar Reaches a New Low Owing to Recent Printing Spree appeared first on Coingape.